The Florida Governmental Utility is aware of recent fraudulent e-mails sent impersonating FGUA representatives. Links in these emails may contain malicious software used to access your system. To prevent exposure, do not click or download links from unknown sources. For more information on our efforts to address this concern as well as efforts you can take to protect your electronic devices, please click here. 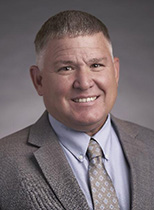 Mr. Parker began his career with Hendry County as its county engineer in 2006 after spending 11 years in the private sector, primarily in land development. He later was elected to public works director for the county, and directs Hendry County airports, special districts, Port LaBelle Utilities, GIS, engineering, and the road and bridge department.

Mr. Parker joined the FGUA board of directors in 2008. He received his bachelor’s degree in civil engineering from the University of South Florida in 1994.