Now that Drippy is close to the end of the journey, we’ve got to keep track of him. The FGUA keeps track of Drippy by using a water meter.

A water meter measures how much water flows through the service line and into the home. As water is used in the home, new water passes through the meter and takes its place. The moving water turns a device inside the meter, which turns dials on the outside of the meter. The FGUA measures this flow of water in gallons.

Overall, the water meter is one of the smallest, but most important components of a water system because it determines how Drippy’s trip will be paid for. Several things must happen to get Drippy to the home. Buildings, pipes, chemicals, electricity, and people all have a part in making the trip for Drippy, a safe one. All of those things cost money. In order to make sure no one is charged unfairly, meters are used.

Every month, a person called a “meter reader” goes around to every house and checks the dials on the meter. Since the meter is like an odometer on a car, the dials keep a cumulative total (adding up over time) of the water used. To figure out how much was used for one month, the meter readers use subtraction to figure out how much was used from one month to the next. This difference is what customers pay.

Did you know? Contrary to popular belief, as meters age, they slow down rather than speed up. This slow down typically offers customers a savings on their bill because the meter shows less usage than what was actually used. 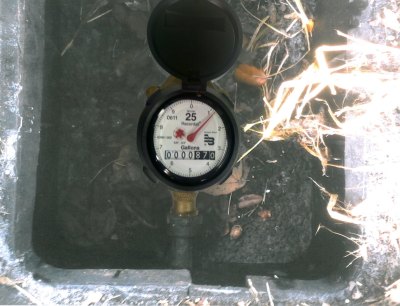